Growing up, I always wished that I had a twin sister because of the infamous television twins: Tia and Tamera Mowry and Mary-Kate and Ashley Olsen. Watching those two set twins in the ’90s, I thought it was so cool because they would able to pull pranks on people . Meet fashion duo The Quann Sisters, aka Cipriana and Tk Wonder.

These electric beautiful (and perhaps very stylish) twins have been buzzing all over Instagram, Tumblr, YouTube and most recently, magazine spreads. Their noteworthy style and outspoken personalities are the many reasons why I admire these fashionable twins. Let me not forget to mention their big, luscious hair that matches well with their big, bold fashion choices. 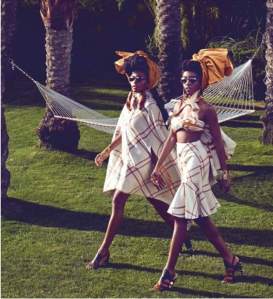 In a interview with Brydie Beauty, Cipriana revealed:

“After years and years of modeling and struggling with my physical image regarding my hair of trying to mold it into someone else’s idea of their “ideal beauty,” I’d just had enough! I wanted to represent the kind of beauty I felt most comfortable with and idolized when I was younger, which was my mother’s image. I was done with masking my identity to represent a false beauty to please the standards of others. Beauty is in the eye of the beholder, and at the end of the day, I realized the most important beholder was me.”

The Quann Sisters were already quite popular on YouTube when the twins won Vogue’s Best Dressed in 2014 which was the icing on the cake for people’s growing desire for these glamorous ladies. Recently, the stylish duo have signed with IMG Models which starts a new chapter of these hot twins’ stardom. From being featured in Vogue to snagging campaigns with brands like Sunglass Hut, what can these trendy set of twins not do? #GoGirl

These twins’ style , ol Hollywood Glam , Afrocentric , Fun …. and these vibrant looks are an example of this. Its safe to say that these ladies are not afraid to wear alluring prints on their clothing items. 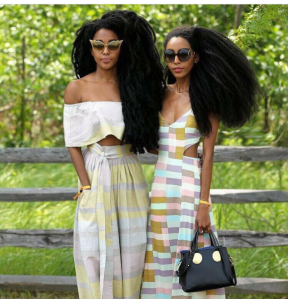 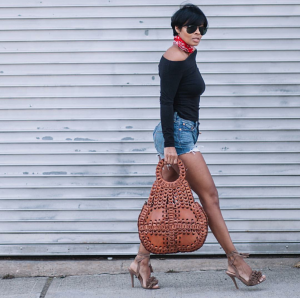 While most fashionistas love to chat about shoes making or breaking an outfit, I believe that they often forget how essential handbags are to an outfit. A fly and bold purse can take a simple outfit from 0-100 real quick . 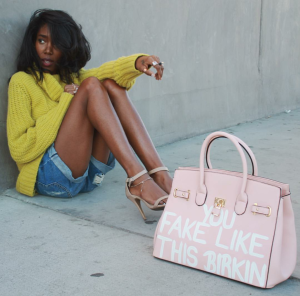 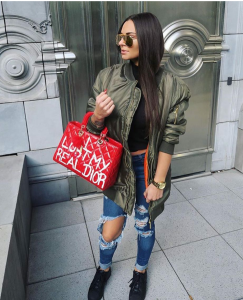 Whether you wear a miniature cross-body, large backpack, or a Louis Vuitton , purses are a fun, and often a necessary accessory to collect. Bold textures and variety in color can give your fashion admirers “Solange” or “Angela Simmons ” vibes, depending on the look that you’re going for. 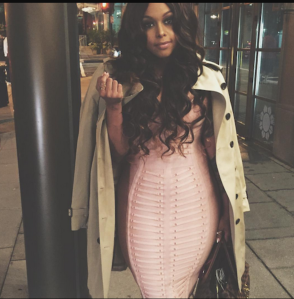 …And for Chrisette Michele, her PCOS was cramping her Life.

Recently Grammy-award winning singer Chrisette Michele opened up to Black Doctor about something that hits close to home for many women- menstrual cramps and the woes of the womb.Except for the 33-year-old singer, the situation was bigger than just a bad heavy period you could suppress with a heating pad and more than any Advil could cure; because four years ago Chrisette was diagnosed with PCOS- Polycistic Ovary Syndrome.

PCOS is a hormonal disorder causing enlarged ovaries with small cysts on the outer edges. Effecting approximately 1 in 10 to 1 in 20 women of reproductive age in America alone, symptoms for PCOS include menstrual irregularity, excess facial and body hair, acne, obesity and of course, pain. According to Chrisette:

“My cramps were so bad every month that sometimes – this happened twice within a couple years span – I had to be rushed off of an airplane or an airplane had to land to rush me to the hospital because I was in that much pain.

Chrisette had fibroids, cysts and endometriosis, and for those who don’t know the difference, here’s a quick breakdown:

Fibroids: Growths within the tissues of the uterus that can vary in shape, size, and location, as they can be found on the outside or deep within the uterine tissue. Fibroids are benign growths, which means they are not cancerous, and rarely require medical treatment.
Cysts: Can become the most painful type of growth and can also be diagnosed as malignant. Generally, cysts develop on the ovaries as sac-like pouches that can either be solid or filled with fluid from the female reproductive system. Unlike fibroids, cysts do not cause menstrual bleeding—the greatest danger with cysts, aside from cancer, comes when they burst and release their contents into other body cavities, which can causes blood-poisoning or other illnesses.
Endometriosis: Is an often painful disorder in which tissue that normally lines the inside of your uterus grows outside your uterus. Endometriosis can cause severe pain, especially during your period. Fertility problems also may develop.
For Chrisette, everyday movement had become somewhat of a burden.

And that she did. At the time of Chrisette’s PCOS diagnosis in 2011, she was in the midst of her vegan diet and new holistic lifestyle. She sought alternative forms of treatment for her pain, including: kinesiology, Reiki treatments and good old fashion prayer, “[I was] asking God to just open up doors and windows for me to see what I should be doing with my body.”

At the time, Chrisette’s doctor didn’t think twice about making changes to her diet, with the exception of eliminating more sugar and salt. Chrisette even went on to transition onto a full “raw vegan” menu, such as peaches for breakfast and watermelon and raw greens for lunch. She also underwent surgery to remove one of her ovaries.

Yet, the pain didn’t stop. And eventually after much discomfort, her doctor revisited Chrisette’s lifestyle habits again, this time suggesting that “going green” had to go. According to the very same specialist (a fellow vegan themselves), Chrisette had to eat meat. The singer said,

A Paleo diet is a diet based on the types of foods presumed to have been eaten by early humans, consisting chiefly of meat, fish, vegetables, and fruit, and excluding dairy or grain products and processed food.

The news wasn’t easy to digest. According to Chrisette, not only had veganism become a part of her new life after seeking a lifestyle change in her late 20’s, it was her “thing” now, her shtick and the box she’d sort-of placed herself in, in front of fans. She felt the pressures to suppress her secret:

“I didn’t want to tell PETA because I had just sat down with PETA and we were so excited. I wouldn’t tell the record label because a part of me was vegan. A part of Chrisette Michele is the natural hair and the vegan.

I started off the vegan journey needing healing and that was almost four-and-a-half years ago and I went on that juice feast because I was so exhausted and distraught with all that I had been through. I just needed to be cleansed.”

These days, Chrisette’s diet consists of sugar-free most things, bunless burgers and yes, meat. She recently testified that the changes have helped her stomach pains decrease drastically:

“I began to experience much less cramping, much lighter cycles and less drastic mood swings before and after my cycle. This is my first interview where I’m letting people know that I’ve decided the Paleo diet is kind of the way for me.”

But not two persons, nor their diets, are the same. If you research the pros of a plant-based diet and/or going green to treat PCOS, you will stumble upon plenty of personal testimonies giving praise to veganism and other alternative forms of healthy dieting that include zero animal consumption. Although Chrisette didn’t disclose why quitting being a raw-vegan worked for her specifically, one thing to consider is the broader anti-inflammatory options of going Paleo.

I can also appreciate Chrisette’s honesty. The reality is, detox teas and trend diets are all the riot these days. Although many people experience success with them, it can often feel you’re upsetting a secret society when you go against the “grain”– literally.

Here is to healthy dieting and doing it your way. Wishing Chrisette and everyone else continued health all year around.

Thanks for taking the time to GLOW,
Tesha.

Ive been smitten lately with these Youtubers and the great content they showcase. Everything From Black Love to Everyday Life is what you can assure youll get when in tune into Yolanda Renee and MsVaughnTV channels. Both ladies are the typical “Girl Next Door” with a dash of “Around the Way Girl” such as myself. But after consideration maybe Vaughn is the “Girl Next Door” and Yolanda is the “Around the Way Girl ” either way i see apart of me in them and i can totally relate to the content. Both channels chronicles the lives of hardworking women with their familes in the everyday world not glitz and glam but raw uncut natural REALNESS…..

MsVaughnTV shares her journey as a Newlywed , Expecting mom , Marketing Maven , and Natural Youtuber with a flare for Bohemian Fashion. I totally can relate to Vaughn on so many levels because i too love bohemian fashion , am a naturalista and soon to Youtuber. We as viewers are attracted to whats quality content in our eyes and whats more your rate as far as similarities. She’s that Chicago chick who speaks her mind but not ratchet very classy and eloquent. I’ve enjoyed following her journey on YouTube and was very please with the Vlog Series “My Life Offline” and now her very own Vlog on her channel titled ” My Real Life”
Are you TUNED IN? 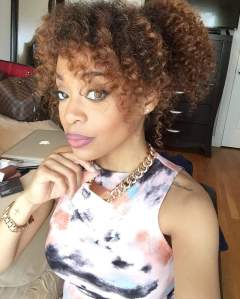 Meet The Becks – Devon , Yolanda , Taylor and Skylar is the YouTube version of The Cosbys. Its like watching a real good family oriented show that you just dont want to stop but you can’t wait to see the next episode. I was so excited to see Black Family Love on YouTube…..Its so inspiring and reassures me of my main goal to wait for love before I start a family. Taylor and Sky sends my ovaries into over drive. Sky is all Devon and Taylor is all Yolanda – One of Each. They show us recipes , natural hair tutorials , family time etc. Taylor loves helping cook and Skylar sings. Devon and Yolanda are raising great respectful young girls. Devon hasnt appeared much on camera but when he does you can feel the love him amd Yolanda share thru the camera. Are you TUNED IN? 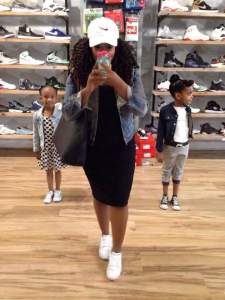