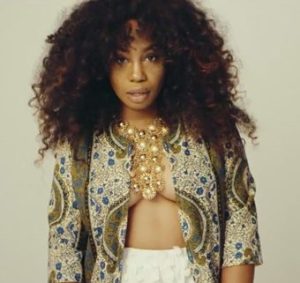 SZA’s debut album ‘Ctrl’ is one of the most talked about about releases of the summer.

In an interview with USA Today, SZA let us in on a little something thats cooking up… the next video to be released from ‘Ctrl’ will be for “The Weekend” — directed by sis Solange Knowles.

“I love her,” said SZA. “I think the universe is just bringing us closer to each other. That’s my homegirl.”

According to B. Scott – If another artist going to be in charge of the visuals for your song, it may as well be Solange. She already showed an affinity for it with a performance piece at The Guggenheim, titled “An Ode To,” and she’s debuting a new performance art piece in Texas later this fall. Allegedly, the video for “The Weekend” takes place at 10 different locations, so the duo sounds like they’re sparing no expense putting this thing together.Even if you throw out the video, the two singers have been spending a decent amount of time around each other later. Both are performing at the Afropunk Festival in Brooklyn on Saturday, and if they’re as tight as SZA makes it seem like they are, they’ll be using plenty of their backstage time to cook up some ideas together. Maybe a collaboration is in the works, because it’s fairly well known they share a mutual admiration for each other’s work.

Im so excited two of my faves are linking up for GREATNESS!