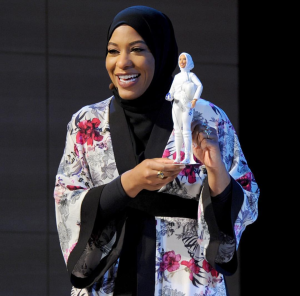 Mattel says that Muhammad, like Misty Copeland and Ava DuVernay before her, is a “shero.” Her doll is part of Barbie’s “Sheroes” collection, the company’s effort to create dolls after real-life role models.

“Barbie is celebrating Ibtihaj not only for her accolades as an Olympian, but for embracing what makes her stand out,” said Sejal Shah Miller, Barbie’s vice president of global marketing. “Ibtihaj is an inspiration to countless girls who never saw themselves represented, and by honoring her story, we hope this doll reminds them that they can be and do anything.”

As for Muhammad, she is more than excited at the honor. Having had to sew hijabs onto her dolls when she was a child, she is happy to see this landmark moment. 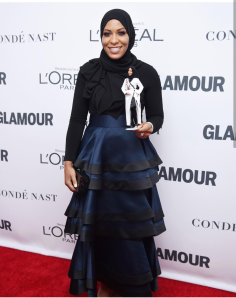 “When I was growing up, I didn’t have many options of dolls that looked like me,” she told the audience  at the Glamour Women of the Year Summit. “But today, we’re changing that.”

Muhammad is also the first Muslim-American woman to win an Olympic medal, taking a bronze in team saber at the 2016 Olympic games.

The Muhammad doll will be available starting in 2018.

Thank you @Mattel for announcing me as the newest member of the @Barbie Shero family! The Barbie Shero Program recognizes women who break boundaries to inspire the next generation of girls and I am so excited to join this incredible group of women. I’m proud to know that little girls everywhere can now play with a Barbie who chooses to wear hijab! This is a childhood dream come true 😭💘 #shero #ibtihajbarbie