America’s Next Top Model should probably thank the heavens that Twitter wasn’t around when it started in 2003. 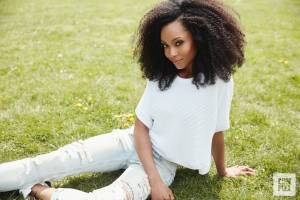 On Saturday, actress Yaya DaCosta shared videos on Instagram after viewers of Love & Hip Hop Miami sent her clips from the show. Musician, Amara La Negra has been struggling to get her message across. In the episode, the singer is criticised for her big afro and black pride

DaCosta had a similar incident on season three of America’s Next Top Model when she proudly wore her hair natural and dressed in an Ankara-print top.

“Every once in a while (more and more often these days), we are reminded of how far we still have to go surrounding issues of tolerance and ethnic sensitivity,” DaCosta said in her Instagram post acknowledging her time on the Tyra Banks’ produced competition show.

We all know nothing about DaCosta and Amara’s stories are new. But in a new world of social media putting peoples’ face in their shit, maybe some people will think before making ignorant remarks about black pride.

I DO NOT OWN PHOTOS