According to court documents, Fabolous punched Emily B seven times in the face before threatening her dad and brother.

Englewood Police said in a statement the rapper, whose real name is John Jackson, turned himself in at 8:30 p.m. Wednesday on a domestic dispute and making a terroristic threat charge. He was released from police custody.

Court documents show the alleged crime stemmed from an earlier incident on March 7, when Jackson while in Los Angeles on a business trip “became enraged” when he found out via Instagram the victim was also in Los Angeles.

According to an affidavit of probable cause, while on a flight back from Los Angeles, the victim told police that Jackson, 40, said via text he wanted to hit her in the head with a baseball bat and that he would kill her but he “did not want to go out like that.” The victim told police she was scared because of the March 7 incident. The victim was later punched by Jackson seven times in the face “causing severe damage to her two front teeth.” She ended up losing her two front teeth, according to court documents.

Because of the incident, “the victim called her father to remove two handguns from the residence due to her fear that they may be used against her,” according to the affidavit. When Jackson arrived at the Kenwood Street residence, he confronted the victim, her brother, and father, but then went to the upstairs of the residence looking for the handguns, which had been removed.

“When he could not locate the guns, the defendant left the house, but not before informing the victim, her father and her brother that he had a bullet for them,” according to court documents.

Jackson has lived in Englewood since 2005, according to property records.

Our Eccentric Find for today is a Steal! Get into Kashmir.VIII‘s $47 “You So Crazy” 2.0 Clutch now.

This canvas style clutch includes a tassel, full printed design on the front and a YKK zip with metal teeth.

This statement piece is guaranteed to make an everyday casual outfit pop!

In Aww? Get yours Here ! 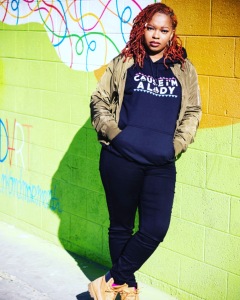 The Eccentric Find of today comes courtesy of Republic and Company! Get into their Martin sweatshirts.

Retailing from $36 this statement piece features a crew neck design, a sweatshirt motif and bold “ Cause Im A Lady” lettering on the front. 90s Flava!

Team this look with your favorite pair of black jeans and sneakers for and everyday casual look! As I did in these pics

Love? Get yours Here!

A Different World was a staple in the black households back in the 90s. Hillman College where the show took place was so LIT everyone wanted to go! Lena and Winnie where my faves , they had so much flava. 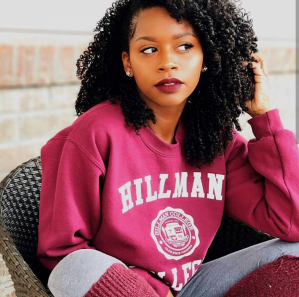 Now you can get your dream college gear. This sweatshirt or tee features bold white lettering, a classic fit unisex design with air-jet spun yarn for a soft feel.

Rock this bomb tee with a pleated skirt with thigh high boots for a fun & flirty look!

Get this 90s vintage top Here

Rihanna and H.E.R. Are Working on ‘Secret Projects’

While she wouldn’t say exactly what they are, when asked if the projects include a music collaboration, she smiled and said, “something like that.”

Watch H.E.R. (real name Gabi Wilson) mention the upcoming projects at the 8-minute mark in the video below.

Her identity remains unknown as she prefers to remain anonymous and only be represented by her music.

The rapper took to Instagram to reveal that the project is called ‘Invasion of Privacy’ and gave everyone their first look at the artwork.

It’s been a longtime coming — let’s hope it lives up too the hype!