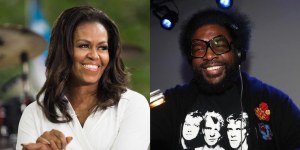 Michelle Obama’s Becoming isn’t just a insanely successful memoir — but its also comes with an amazing 300-song soundtrack from The Roots drummer and curator, Questlove.

“Like a lot of people, I connect many of my memories with the songs and melodies I was listening to at the time,” Obama said in statement shared with Billboard. “From the jazz and Stevie Wonder of my childhood, to Prince and Earth, Wind & Fire as I came into my own as an adult, to Beyoncé, Janelle Monáe, and so many others who provided the stirring backbeats of my time in the White House — music has always been a defining part of who I’ve become.

Obama went on to say that she was “thankful to Questlove for curating these playlists and infusing them with his signature style.”

“Life’s a little better when we live it to Questlove’s beat,” she said.

The whole thing is called The Michelle Obama Musiaqualogy and it’s playing at Obama’s book tour events all over the country. If you can’t make it out to see Obama speak,Musiaqualogy is available on Spotify.  The playlist comes in three volumes, split by era. Volume One runs from 1964-1979. Volume Two covers 1980-1997. Volume Three spans 1997-2018. The first two playlists are meant to be played in order. True to its time period, the 1997-2018 playlist is meant to be played on shuffle.