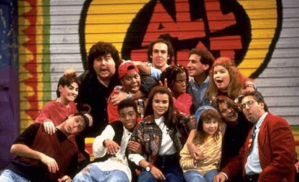 All That’ is coming back !

The iconic 90s sketch-comedy series is getting a reboot on Nickelodeon with show alum Kenan Thompson as executive producer.

Nickelodeon will revive the program — a “Saturday Night Live” for the tween set — with an all-new cast. But the show will have callbacks to its past as well. Kenan Thompson, the long-running “SNL” cast member who got his start on television when “All That” launched in 1994, will serve as an executive producer. Nickelodeon expects some former cast members to make appearances in the series.

The sketch comedy show “stayed in the zeitgeist for many years,” Brian Robbins, president of Nickelodeon, tells Variety. “People are really fond of it.” One regular sketch, “Good Burger,” was set in a fast-food restaurant with a clueless cashier, and served up the premise for an original movie in 1997. Kids also loved recurring characters like “Walter the Earboy,” “The Spice Boys,” and “Baggin’ Saggin’ Barry.”

Thompson is one of the people who remembers the series fondly. “It means everything to me,” he told Variety. “It was my first job that I ever had. It gave me an opportunity.”

Robbins was a co-creator and an executive producer of the original run of the series, which during its time featured Thompson, Kel Mitchell, Amanda Bynes, Nick Cannon and Jamie Spears, among others. Many of the cast members went on to star in other landmark Nickelodeon series, such as “The Amanda Show,” “Kenan and Kel” and “Drake and Josh.” Thompson said many of the show’s stars remain close more than a decade after “All That” went off the air.

An “All That” revival would continue Nickelodeon’s recent efforts to dig into its past to help secure its future. In recent years, Nickelodeon executives have tested new editions of one-time stalwarts like “Hey Arnold” and “Legends of the Hidden Temple,” sometimes as movie specials. Such programs can spur viewing by both parents and children, as one generation tries to interest another in favorite pieces of popular culture.

“We think there’s a great opportunity to find the next pool of stars,” said Robbins. “We want to bring the show back in a real fun way. This summer, we are going to bring back a lot of the original cast and the cast through the years, and let them introduce the new cast of ‘All That’ to the world.” He suggested the program would be “a sort of mash-up of some of the old sketches and a lot of new sketches.”

For Thompson, the idea, pitched to him directly by Robbins, was a “no-brainer.” Thompson said he and Robbins have “always remained close. He is one of my second fathers.” Thompson didn’t hesitate when Robbins suggested he work on the new program as an executive producer.

“Every time he does that, he has been right on the money. He has done it infinite times in my life,” Thompson said.

Thompson is not giving up his day job on “Saturday Night Live,” however, and he acknowledges “my time is limited.” But he expects to have some say over the show’s tone and casting, among other things. “If I’m not at the table read, I’ll be on the phone during the table read,’ he said. “I’ll be around.” He hopes the program will have a similar role at the Viacom-owned kids’ outlet. “I think it should be a staple show for Nickelodeon,” he said.

I would LOVE if the original cast members make recurring appearances with fresh, new, talent.