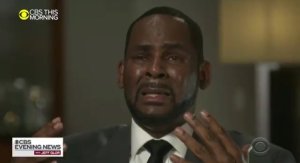 Gayle King landed the first sit-down interview with R. Kelly since he’s been arrested and charged with 10 counts of aggravated sexual abuse.

The full interview airs Wednesday (3/6) at 7am EST on CBS, but a clip of what we will see has been released and R. Kelly is denying everything.

“You can’t double jeopardy me like that. It’s not fair. When you beat your case, you beat you case,” he says in the clip.

Gayle doesnt let on the questions she presses him on allegations he’s held women hostage, R. Kelly gets visibly upset.

R&B singer R. Kelly, charged with aggravated sexual abuse, angrily denied the accusations in a new interview with @GayleKing, insisting the claims are “rumors” & “not true.”