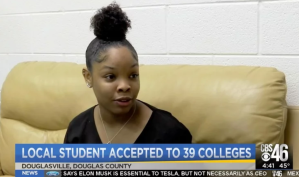 Jordan Nixon, a 17-year-old high school senior at Douglas County High, has been accepted into 39 colleges and awarded $1.6 million in scholarships.

“The crazy thing is, I’m still waiting on decision letters, but I was not expecting that at all,” Nixon told the CBS 46.

Nixon’s acceptances are the highest number any student at Douglas County High has ever received, the outlet reported.

“We’re so happy for her because she does put in a lot of due diligence into applying for these schools,” Nixon’s parents Angelia and Arthur Nixon told CBS 46.

Her parents also described her as independent, well-rounded and an active participant in a plethora of extracurricular activities, CBS 46 reported.

“I am one of the captains of the varsity cheer team at Douglass County, I’m in Chick-fil-A Leader Academy, and I also participate in DECA (Distributive Education Clubs of America),” the soon-to-be college student said.

Nixon explained she applied to about 50 schools, but is still surprised every time she reads a congratulations letter.

“It’s shocking, each and every time, you’re taken aback every time you open one,” Nixon told CBS 46.

As for how Nixon was able to rack up that many acceptances, she says “I don’t study all the time, but I definitely do study, I think my secret is to just give it my all.”

Nixon also spoke to Fox 5 Atlanta this link opens in a new tab, explaining that she hopes her story inspires others.

“I wanted to challenge myself,” Nixon told the outlet. “That was the most important thing for me, just to show others anything is possible and that anyone can accomplish it too.”

Nixon has yet to decide on a college, but has until May 1 to do so.

Glow Gurl GLOW. This is incredible 🏆🏆