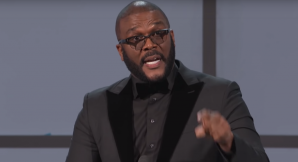 Tyler Perry has teamed up with BET to launch the network’s ‘BET+’ subscription streaming service coming this fall.

Not only will the platform feature a bunch of Tyler’s new projects, but it’ll also house Tyler’s entire catalog of projects in addition to other BET original series, shows, and movies.

BET awarded Tyler with this year’s Ultimate Icon Award at the 2019 BET Awards.

While accepting the Ultimate Icon honor at the BET Awards on Sunday, Perry delivered an empowering, heartfelt speech about the life experiences that have allowed him to have such a successful career.

The writer, director, and actor, recalled growing up listening to the jokes his mother and her friends would tell one another, and later, when his abusive father would beat his mother, he would recite the jokes back to her in an effort to make her laugh. He also recalled walking to school as a young boy and being the only one willing to help an old man cross the street. “That moment reminded me of my mother, bringing out of her pain with laughter, helping her cross,” he said. He has spent much of his career trying to help black men and women “cross,” all the while keeping the thought of his mother at the forefront of his efforts.

“When I built my studio, I built it in a neighborhood that is one of the poorest black neighborhoods in Atlanta so that young black kids could see that a black man did that, and they can do it too. I was trying to help somebody cross,” Perry told the audience. “The studio was once a Confederate Army base, which meant that there was Confederate soldiers on that base, plotting and planning on how to keep 3.9 million Negroes enslaved. Now that land is owned by one Negro.”