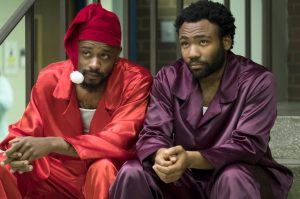 ‘Atlanta’ has been renewed by FX for a fourth season — and the third season hasn’t even started production yet!

via Shadow and Act:

The news was announced by FX on Tuesday. Joining the previously-announced Season 4, Season 3 of the Donald Glover series will also have eight episodes. Both will be shot in Spring 2020, presumably capitalizing on the schedule availability of its stars.

“What more can be said about Atlanta than the critical acclaim and accolades that Donald, Paul, Dianne, Stephen and Hiro have earned for two exceptional seasons of what is clearly one of the best shows on television,” said Eric Schrier, President, FX Entertainment in a statement received by Shadow And Act. “This group of collaborators and cast have created one of the most original, innovative stories of this generation and we are proud to be their partners.”

In Atlanta, two cousins work through the Atlanta music scene in order to better their lives and the lives of their families.  Glover portrays Earn Marks, a young manager trying to get his cousin’s career off the ground. Brian Tyree Henry is Alfred “Al” Miles, aka Paper Boi, is a new hot rapper trying to understand the line between real life and street life. Lakeith Stanfield is Darius, Alfred’s right-hand man and visionary and Zazie Beetz is Van, is Earn’s best friend and the mother of Earn’s daughter.

So ready for this !