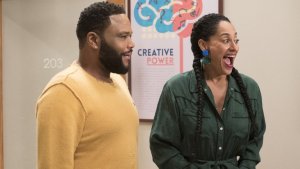 Black-ish could be giving viewers another dope spinoff.

According to Deadline, a Rainbow-focused episode will be the highlight of ABC sitcom’s fifth season. It will feature flashbacks to early events in her life in addition to serving as the potential gateway into a Black-ish prequel centered around Rainbow’s childhood.

As fans know, the character played by Tracee Ellis Ross had a unique multicultural upbringing. This plus the theatrics surrounding her home life would serve as the show’s muse. Like the upcoming episode, the plot’s set in the 1980s and ’90s and will follow the franchise’s trend of using comedy to answer societal questions.

The idea of a Bow-based spinoff has been tossed around since before the launch of Grown-ish. Originally, the series that follows the college maturation of the Johnsons’ daughter Zoey (Yara Shahidi) was pitched as a project about Rainbow and Zoey’s relationship. After critiques, it turned into the show it is today and quickly became a hit for ABC affiliate Freeform.

Although no deals have been completed, Black-ish creator Kenya Barris is predicted to serve as an executive producers, with Ross likely to do the same. It’s unclear if the series would stay on ABC and its affiliates or follow Barris to his new home at Netflix. Either way, the success of both Black-ish and Grown-ish combined with the popularity of Tracee Ellis Ross are perfect ingredients for an instant fan-favorite.