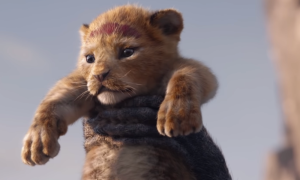 The teaser for Disney’s ‘The Lion King’ remake has arrived and I seriously can’t get over how amazing it looks!

The fact that James Earl Jones is reprising his role as Mufasa is EVERYTHING with Donald Glover taking on the voice of Simba and Beyoncé as Nala — the live-action cinematography is breathtaking.