We all know Kandi Burruss is all about her BAG! Being that this is one of the most popular “Real Housewives” franchises, Burruss is bringing in the most dough if you ask her co-star Kenya Moore.

Moore set the record straight during an appearance on The Wendy Williams Show Tuesday (Nov. 5). When asked if she was after her arch nemesis Nene Leakes’s paycheck, Moore said she has her own money. She also shut down Wendy Williams’s statement that Leakes is the top-billed star of the show.

“That’s not true. Kandi makes the most money, okay? So if I was coming for anybody’s purse and bag, it would be Kandi’s.”

“Kandi is the real HBIC of that show.”

Other than NeNe Leakes, Kandi Burruss is the longest-running cast member of the show as she joined in the second season. But considering Leakes break during season 8, she and Burruss are pretty much neck and neck when it comes to time on the show. 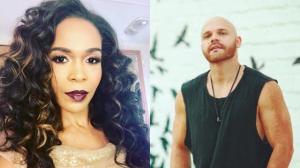 Michelle Williams and pastor Chad Johnson engagement is OFF.

A Fearless Michelle broke the news via Instagram Story on Friday morning — the same day she dropped her new single, “Fearless.”

“I still remain fearless,” she wrote in simple white text on a black background. “I guess I still remain single! Things didn’t work out. The healing that needs to take place is a must! I don’t wanna destroy another relationship. Blessings to him, his family and ministry. #FEARLESS”

The pair announced their engagement in April of this year. They met on a spiritual retreats back in 2017.

Season 11 of ‘The Real Housewives of Atlanta’ premiered last Sunday on Bravo to a huge smaller audience.

While it was still the #1 rated unscripted show for Sunday night, the premiere drew about 500,000 less viewers compared to last year’s season premiere.

Im sure its because fan favorite and life of the show Kenya Moore played a major role — it was definitely felt from the premiere. Kenya’s life is thriving and we want in we’ve been waiting for this all these season.

I do love Shamari and Eva cool but idk chile.

What did you think of the ‘RHOA’ season 11 premiere?