Sis Solo took to ‘The Tonight Show’ stage to give viewers a medley from her classic album, ‘When I Get Home.’

Solange strung together “Taking on the Light,” “Things I Imagined,” “Down with the Clique,” “Binz,” and “Almeda” to create a nine-minute set for Fallon. Although she was limited to a late-night stage, Solange still put together a visual performance that rivals her concerts. She was accompanied by live musicians as well as dancers who synchronized their movements with Solange and her back up singers. The set ended with only Solange and a figure draped in silver performing on a black stage.

Like almost everything Solange does, this was an atypical take on Fallon’s musical guest segment. Her performance was meant to honor When I Get Home’s interdisciplinary art film. The original version was a 33-minute project that Solange described as a “Texas film.” It dropped in March along with her album. Next week, the singer will be releasing a director’s cut of the film for her fans.

When I Get Home is Solange’s fourth studio album. It follows her highly acclaimed 2016 album, A Seat at the Table. While A Seat at the Table uses Solange’s connection to New Orleans as a backdrop to address several themes, When I Get Home is dedicated to her hometown of Houston, Texas. The film uses historically black areas of Houston as it’s setting including the hair salon that used to be owned by her mother, Tina Knowles-Lawson.

Rumors have been swirling for quite some time, but now it’s official official — Solange and Alan Ferguson have separated after being together 11 years .

They met in 2008 after being introduced by Janelle Monae and eventually got married in 2014.

the past 2 years have brought me more physical and spiritual transition and evolution than ever before
my body left me with no choice but to listen and be still
within that stillness i begin my journey in confronting my worst enemy, fear.
ive lived my best and worst moments in front of the lens and gaze of the world since i was a teenager. ive always tried to live in my truth no matter how ugly or full of love it is. ive also tried to carve out the space to protect my heart, and my life as it unfolds, evolves, and changes. 11 years ago i met a phenomenal man who changed every existence of my life. early this year we separated and parted ways, (and tho it ain’t nan no body business ?) i find it necessary to protect the sacredness of my personal truth and to live in it fully just as I have before and will continue to do. it is unfair to not have power of your own story as you shape and mold and rewrite it yourself. a nigga ain’t perfect, but im leaning into the fear of the unknown and all the glory and power i know exist within god and the universes grace. may all of your transitions no matter how big or small, be kind to you and filled with incredible love and light!

If you were attending Coachella because Solange was performing, I have some disappointing news.

Solange will no longer be performing at the festival.

The official Coachella social media accounts announced that due to major production delays she won’t be taking the stage.

Due to major production delays, Solange will unfortunately no longer be performing at this year’s festival. She sends her sincerest apologies, and looks forward to performing at Coachella in the future.

Dang , that sucks will she be at Essence? Im she had something amazing planned.

Solange’s new album, When I Get Home, is being in less than hours (March 1st) on all platforms

Solange has released another clip on her social media account. In the caption, she wrote “callll meeee 281-330-8004,” which is in reference to the phone number Mike Jones used to suggest people to dial out back in the day. She has also released the track list for the album which is made up of 19 songs.

shout out devin the duuuude

Solange Knowles arrived at the 2018 Met Gala in a look that deserves recognition.

While it’s not the most over-the-top look of the night, Solange’s look is the only Met Gala ensemble we’ve seen to EVER incorporate a durag.

Last night, Solange tweeted out several looks along with a poll asking fans which look they preferred.

Though it didn’t win the poll, Solange opted for the durag look and shut shit down! 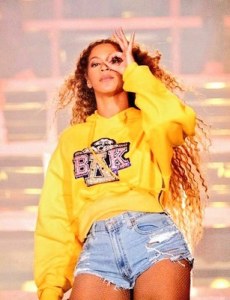 Ivy McGregor, Director of Philanthropy and Corporate Relations at Parkwood Entertainment, which houses BeyGOOD, said the program salutes “the rich legacy of Historically Black Colleges and Universities.” She added, “We honor all institutions of higher learning for maintaining culture and creating environments for optimal learning which expands dreams and the seas of possibilities for students.”

Beyoncé established the scholarship in April 2017 to mark the one-year anniversary of her 2016 visual LP, Lemonade. While the first year spotlighted young women, the 2018-2019 year will expand to all qualifying students at the four universities, regardless of gender.

The associated disciplines will include literature, creative arts, African American studies, science, education, business, communications, social sciences, computer science and engineering. Applicants must maintain a 3.5 or better GPA. The four universities will select all finalists and winners, with recipients announced this summer.

Beyoncé honored the history of HBCUs during her headlining Coachella set on Saturday, incorporating over 150 musicians and dancers – including a marching band and choir – into her detailed set, which also included guest spots from Jay Z, Solange and her former Destiny’s Child members.